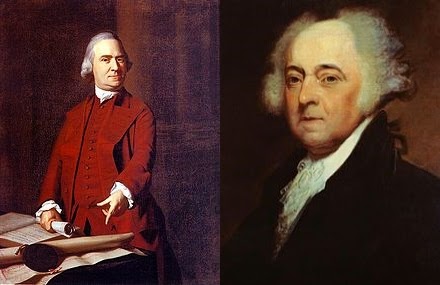 Samuel and John Adams.
Cousins, both seeking a new form of government away from what they saw as the tyranny of Great Britain. Both active in the politics of Massachusetts. Both active in the Declaration of Independence. Both considered "Founding Fathers". However, they had different approaches to achieving their 'goals'.
Let's put aside that John was a bit of a big central government person. While relevant to him overall, it's not pertinent to this post.
John was a lawyer by trade and spent most of his effort in the fight for independence arguing. It's what lawyers do. All of his efforts were for a 'peaceful' separation from Great Britain. He believed that independence could be achieved through petition.
Sam, if you will, was a politician, but also an activist. Not content with simple petitions and procedure, he argued, publicly and privately for a resistance to the tyranny. While it's unclear how much of a role he had inside the Sons of Liberty, he certainly advocated for their actions and was a leader in the infamous "Tea Party".

People like Kerodin, of the III Percent Patriots, are calling for action, of sorts. Active resistance is probably the best term for it. While not calling for people to attack government, the call is to resist with whatever force is necessary, whichever form that takes.
We then have Glenn Beck, who is calling for resistance through the ballot box. Believing that resorting to violence is not the way, he calls for calm and to fight through the redress of grievance; voting, marching, etc...
Like Sam and John, two approaches towards a similar goal of freedom and liberty.

However, also like Sam and John, I fear both will be needed in order to change the course of things.

Yes, to use the age old phrase, violence begets violence. The question you have to ask is, "Who threw the first punch?"
The State has become more and more oppressive. While I'm sure the increase in the availability of news from around the US has contributed to it, there's not a day that goes by without hearing of another LEO who has arrested/beaten/tased/maced/shot/killed someone who did nothing wrong other than not submit to the will of The State. The phrases "Stop resisting!" and "I felt my life was threatened" have become so common place that to not see them in a story of LEO abuse is surprising. And yet people react with almost glee when put into a state of near martial law saying "Whatever it takes to protect us." "Police work is a dangerous job and they worry about going home at night".
The State has actively targeted people who disagree with it. It's not a matter of political party, but a matter of liberty or statism. If you oppose statism, you are thus deemed an Enemy Of The State and your life will become hell. How many individuals have suddenly been up for an IRS audit because they spoke out against government? How many whistleblowers have had their lives ruined with false charges because they spoke out about injustice? And the sheep call for more government to protect them.
Every attempt is being made to restrict the access to arms and armament. The natural right protected (not granted) by the Second Amendment of the Constitution was to allow a citizenry to resist the advancement of tyranny; whether personal or governmental. Like all tyranny that's effective, it starts slowly and 'legally'. Remember, the Nazi's rose to power through voting and they justified all actions taken against their state enemies through the law. But remember, "nobody needs an assault weapon". "It's for the children."

I abhor violence. Sometimes it's the only action that can be taken, but if it can be avoided, all the better. But like The Revolution, there comes a time to determine which path you will take.
In the struggle for independence, it's said that 1/3 were for independence, 1/3 were loyal to The Crown, and 1/3 didn't care. In total, 3% of the citizenry of the colonies actually fought for independence. So using rough numbers, 30% of the people of the American Colonies wanted independence, but didn't believe in violent action.

All comments will be moderated. I don't suffer temper tantrums.

Gabe
A man in his 40's just trying to find a way to vent some steam.

Sites and Blogs I Read